Philip Burke (1956) is an American caricature artist and illustrator, known for his vivid portraits that appeared in the pages of Rolling Stone magazine for almost a decade. Burke's work extends beyond the likes of contemporary musicians; often serving as a chronicle of the political and social undercurrent on the pages of Vanity Fair, Time, Vogue or The New Yorker and others.

Burke was born in Buffalo, New York. He was brought up in a strict Catholic home and was baptized by his great uncle Buffalo Bishop Burke. His first dabbling with caricatures date back to 1971, while a high school sophomore. Philip left Buffalo for the University of Toronto in 1974 where he drew caricatures for the University newspaper during his time there. Although he lost interest in academics, he packed up his portfolio and headed for New York City to pursue a career as an illustrator. Living in the West Village, he began drawing pen and ink caricatures for the Village Voice and various other publications. In 1982 Burke was shifting gears and began painting with oils. He signed an exclusive contract with the newly formed Vanity Fair magazine. A year later, Burke returned to his hometown, Buffalo, New York where he got married and started a family.

Andy Warhol became a fan of Burke's art after seeing his illustrations in Vanity Fair. Burke bumped into Warhol on a New York street and the two became friends. After a year Burke got up enough courage to ask Warhol if he could paint him, and he agreed.

By 1989 Burke's paintings of contemporary musicians began being featured on the pages of Rolling Stone magazine. Every 2 weeks the table of contents would showcase a Philip Burke interpretation of the person behind the music.

In the late 1990s, Burke's work would appear on the covers of Time magazine, and continues to be published in The New Yorker, Vanity fair and GQ.

When Tina Brown became editor of The New Yorker, she brought in Burke to work for her. Patricia Bradbury, former Art Director of Newsweek Magazine said "He is just phenomenal, he does the best caricatures I've seen, there is nobody else like him". New York Times art director Steven Heller says "Burke has changed the art form. He uses paint in a way that no other cartoonist I know uses it and in fact breaks from the tradition of caricature.

Burke's work has been exhibited in a partnership with the Rock and Roll Hall of Fame in Cleveland, Ohio. The exhibit, The Color of Rock: The Art of Philip Burke, was on view at the Rock Hall from November 2006 to April 2007. The exhibit now travels throughout the United States. His original works, mainly in oil, encompass canvases from 40 inches to 12 feet in length. His subject matter has included rock performers, royalty, newsworthy politicos and entertainers from all over the globe.

His work can also be viewed in the traveling Rock & Roll Hall of Fame exhibit, featured galleries throughout the US and on occasion in a "live painting" where the artist himself embellishes original or limited edition reproductions of his art.

Philip Burke is an artist whose work has been selected for shows and exhibits by artist's organizations such as Society of Illustrators, Society of Publication Design and Society of Newspaper Design.

In 2002, Burke's passion for rock and roll was displayed in an eight-foot guitar on which he depicted Pete Townshend on one side and Shirley Manson on the other. The guitar, which was Rolling Stone's entry into Cleveland's Guitar Mania exhibit, was dubbed "Smash Hit" and displayed upside down, being held by steel arms about to smash it to the floor. The guitar was on display at the Rock and Roll Hall of Fame until it sold at a United Way auction for $30,000.00. There's a lot of rock and roll in Philip Burke and a lot of Philip Burke in rock and roll.

© 2021. All content on this blog is protected by international copyright laws All images are copyrighted © by Philip Burke or assignee. Apart from fair dealing for the purpose of private study, research, criticism or review as permitted under the Copyright Act, the use of any image from this site is prohibited unless prior written permission is obtained. All images used for illustrative purposes only Alejandro Otero (1921—1990) was a Venezuelan painter of Geometric abstraction, a sculptor, a writer and a cultural promoter. He was a founding member of the Los Disidentes group.

Alejandro Otero studied art at the Escuela de Artes Plásticas y Artes Aplicadas de Caracas from 1939 to 1945. In 1940 he won a prize in the First Venezuelan Official Art Salon. After his studies, Otero traveled to New York and Paris where he focused his work on a revision of Cubism in 1945, living in Paris until 1952. In 1945 he also went to Washington, D.C., where he exhibited figurative works at the Pan American Union. He was married to Venezuelan artist Mercedes Pardo in London, 1951.

He produced some of his most important pictorial series in Paris, including Las Cafeteras (The Coffee Pots), painted between 1946 and 1948, which marks his transition from representation to abstraction. Shown at the Museo de Bellas Artes in Caracas in 1949, these paintings caused a critical uproar in culturally conservative Venezuela, which ultimately, helped trigger the emergence of modernist abstraction in Venezuela. This works became well known in 1948 at an exhibition in Washington, D.C. since they served as a transition for Otero to overcome Realism and start a new era for Venezuelan painting.

In 1950, Otero traveled in the Netherlands, seeking out the work of Piet Mondrian, an artist who became pivotal for the development of Otero's new series of works, including Líneas de color sobre fondo blanco (Colored Lines on a White Background) of 1951 and Collages ortogonales (Orthogonal Collages) of 1951–52. These later works, dynamic collages that featured a tight weave of horizontal and vertical bands of multihued paper, show the artist experimenting with the spatial and optical effects of line and color. The idea of the module in Otero's practice first emerged in these works, in which he exhaustively explored a dynamic conception of space and pictorial structure typical of Op Art and Kinetic Art.

Drawn back to Caracas, he was invited to participate in the integration of the visual arts into the architectural program of the Ciudad Universitaria de Caracas, a project directed and promoted by the architect Carlos Raúl Villanueva, and considered the most advanced effort in architecture and urbanism in the country. As part of a large group of Venezuelan and foreign artists (including Hans Arp, Alexander Calder, Fernand Léger, Victor Vasarely, Mateo Manaure, Francisco Narváez, and Jesús Rafael Soto) contributing to the project, Otero realized a series of large-scale public works, including murals, stained glass windows, and Policromías (Polychromies), facades in glass mosaic.

Between 1955 and 1960, he developed the extraordinary series of seventy-five Colorhythms, one of his major contributions to the field of painting. In 1955, Otero produced his first Colorhythm. Painted with Duco, a shiny industrial lacquer, applied with spray guns or rollers on wood or Plexiglas, the Colorhythms are large-scale immersive compositional modules executed on rectangular supports. Structured by parallel, evenly spaced, dark vertical bands on white grounds, the paintings have color markings placed between the bands, which activate the entire structure of the plane. In these works, Otero succeeded in emphasizing rhythm and color over form, resulting in a suggestive spatial ambiguity typical of Op Art. As a consequence of optical intensity, chromatic vibration, and rhythmic movement, the picture plane seems to expand dynamically outwards. With the Coloryhthms, Otero proposed an idea of particular importance: the notion of the plane as a spatial field of forces in constant expansion, functioning simultaneously as immersive painting, volume, and architecture.

In 1958 Otero was awarded the National Prize for Painting in the Official Salon, and in 1959 he represented Venezuela in the São Paulo Art Biennial, receiving an honourable mention. He is in the collection of The Museum of Modern Art (MoMA) in New York City.[2]

In the 1960s he abandoned painting in order to work on a larger scale in his civic sculptures, such as Delta Solar. He also produced collages of objets trouvés, as in Page Picture No. 1. Towards the end of his life he carried out many monumental public art commissions in many American cities. In 2012 the exhibition Resonant Space: The Colorhythms of Alejandro Otero organized by the Instituto de Arte Contemporânea [pt] (IAC), was presented at the Pinacoteca do Estado de São Paulo, Brazil.

© 2021. All content on this blog is protected by international copyright laws All images are copyrighted © by Alejandro Otero or assignee. Apart from fair dealing for the purpose of private study, research, criticism or review as permitted under the Copyright Act, the use of any image from this site is prohibited unless prior written permission is obtained. All images used for illustrative purposes only 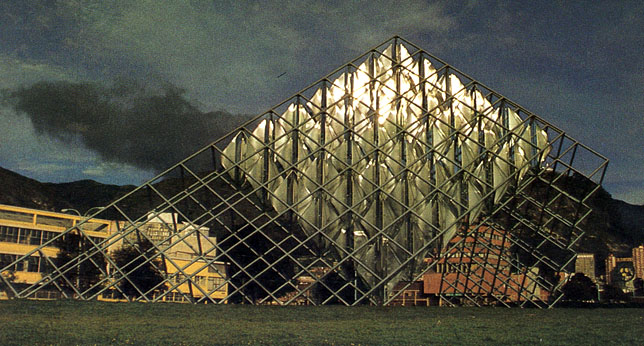