Richard Lindner was born in Hamburg, Germany. In 1905 the family moved to Nuremberg, where Lindner's mother was owner of a custom-fitting corset business and Richard Lindner grew up and studied at the Kunstgewerbeschule (Arts and Crafts School), now the Academy of Fine Arts Nuremberg. From 1924 to 1927 he lived in Munich and studied there from 1925. In 1927 Lindner moved to Berlin and stayed there until 1928, when he returned to Munich to become art director of a publishing firm. He remained in Munich until 1933, when he was forced to flee to Paris. Once in Paris, Lindner became politically engaged, sought contact with French artists and earned his living as a commercial artist. He was interned when World War II broke out in 1939 and later served in the French Army.

In 1941, Lindner moved to the United States and worked in New York City as an illustrator of books and magazines. There he made contact with New York artists and German emigrants such as Albert Einstein, Marlene Dietrich, and Saul Steinberg. In 1948, Lindner became an American citizen.

In 1952, Lindner started teaching at the Pratt Institute, Brooklyn. In 1957 Lindner received the William and Norma Copley Foundation-Award. In 1965, he became Guest Professor at the Hochschule für bildende Künste in Hamburg, Germany. His paintings at this time used the sexual symbolism of advertising and investigated definitions of gender roles in the media. In 1967, Lindner moved to Yale University School of Art and Architecture, New Haven.

Richard Lindner started his career as an artist eventually at the age of 40 in New York. In this metropolitan jungle Lindner created his oeuvre: exciting and powerful images of robot like figures, amazons and heroines, harlequins of self-styled heroes - his artistic panorama of the unruly 60s and 70s of the 20th century. One of Lindner's paintings, "Boy With Machine," 1954, appears on the cover-leaf of Deleuze's Anti-Oedipus, and thus the image has formed part of many readers' introduction to Deleuze's later and more accessible philosophy.

© 2018. All images are copyrighted © by Richard Lindner or assignee. The use of any image from this site is prohibited unless prior written permission is obtained. 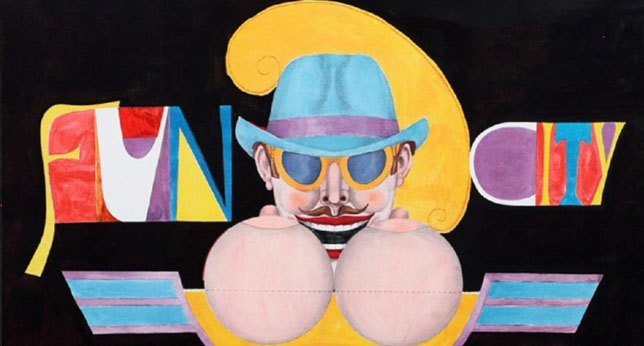