Artist of the day, August 31: Norma Lyon "The Butter Cow Lady", an American farmer and sculptor (#786)

Norma Duffield Stong "Duffy" Lyon (1929 – 2011) was an American farmer and artist nicknamed The Butter Cow Lady. She was known for creating elaborate butter sculptures at the Iowa State Fair from 1960 until 2006, when she retired. She also created sculptures for other state fairs, as well as commissioned works for celebrities and politicians.

Lyon was born in Nashville, Tennessee, the daughter of Benton J. Stong, a newspaper reporter, and his wife, Elsa. Her grandmother, Bertha Clark, was a founder of the Knoxville Symphony Orchestra, and her uncle, Phil Stong, wrote the book State Fair, which was later made into three movies and a stage musical.

She studied animal science at Iowa State University, because they did not allow women in their Veterinary Sciences program at the time. There she trained in sculpture with artist Christian Petersen.

She married Gaylord "Joe" Lyon on July 22, 1950 in Ames, Iowa, and they moved to Toledo, Iowa, to run their dairy farm, Lyon Jerseys. The couple had nine children.

In 1960, she took over the Iowa State Fair butter cow creation, a tradition since 1911. She later expanded to creating other sculptures, including Garth Brooks, Elvis Presley, John Wayne, Peanuts characters, a Harley-Davidson motorcycle, American Gothic by Grant Wood and the Last Supper. She also made busts of Katie Couric, Matt Lauer, Barack Obama and a cheese bust of David Letterman.

Lyon appeared on To Tell the Truth in 1963, and was correctly identified as the Butter Cow Lady by two of the panelists. She later appeared on Late Night with David Letterman with a cow carved from cheese. She was the subject of a 2002 book, The Butter Cow Lady, written by Brenda Mickle.

© 2019. All content on this blog is protected by international copyright laws All images are copyrighted © by Norma Lyon, "The Butter Cow Lady",  or assignee. Apart from fair dealing for the purpose of private study, research, criticism or review as permitted under the Copyright Act, the use of any image from this site is prohibited unless prior written permission is obtained. All images used for illustrative purposes only 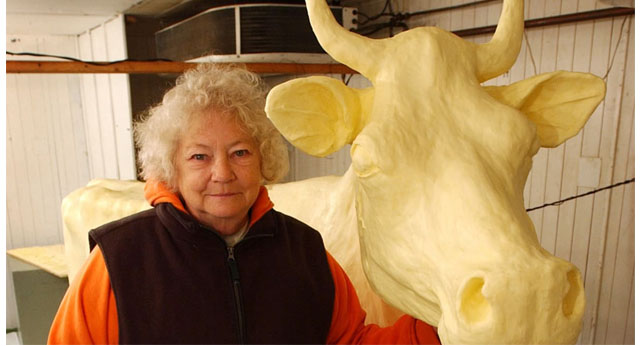 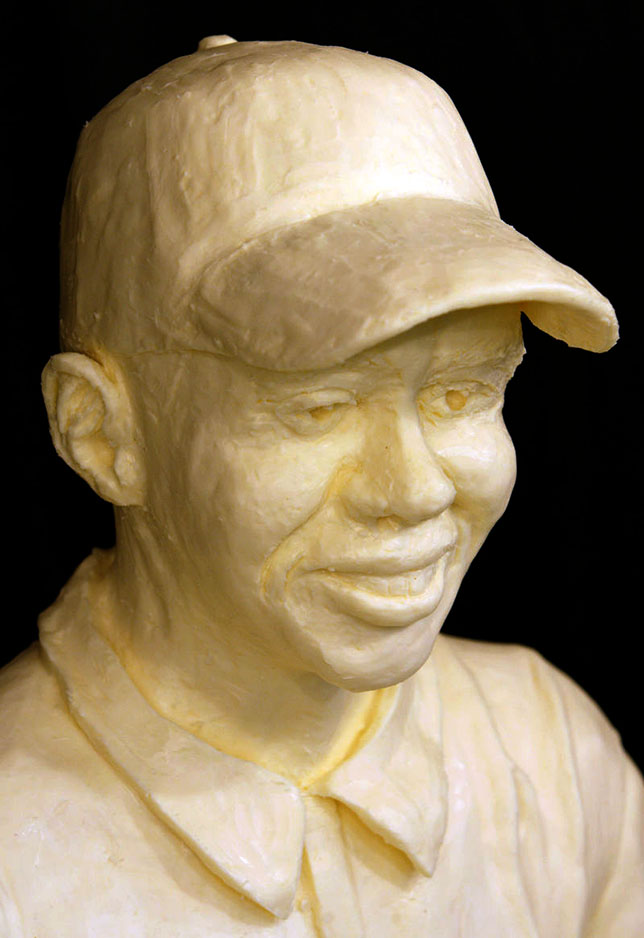 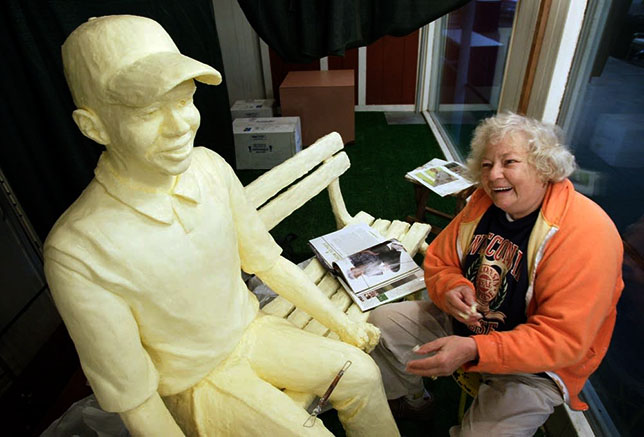 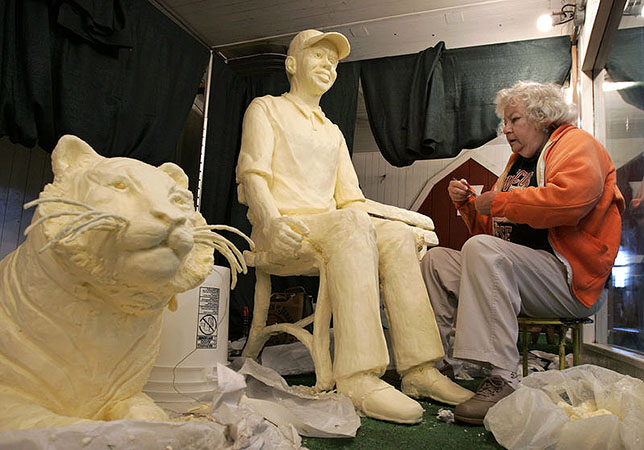 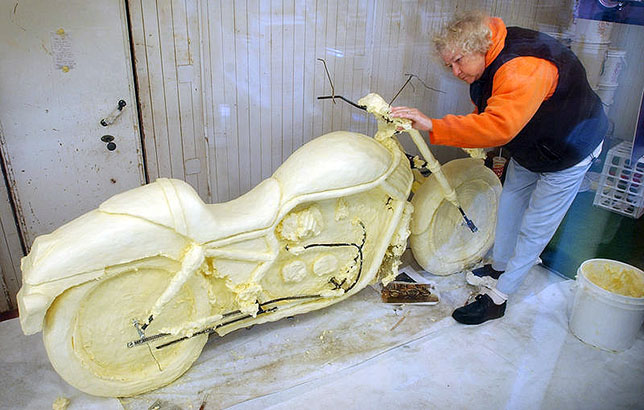 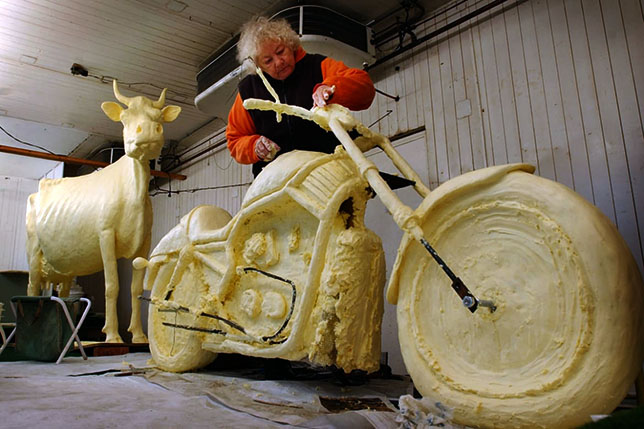 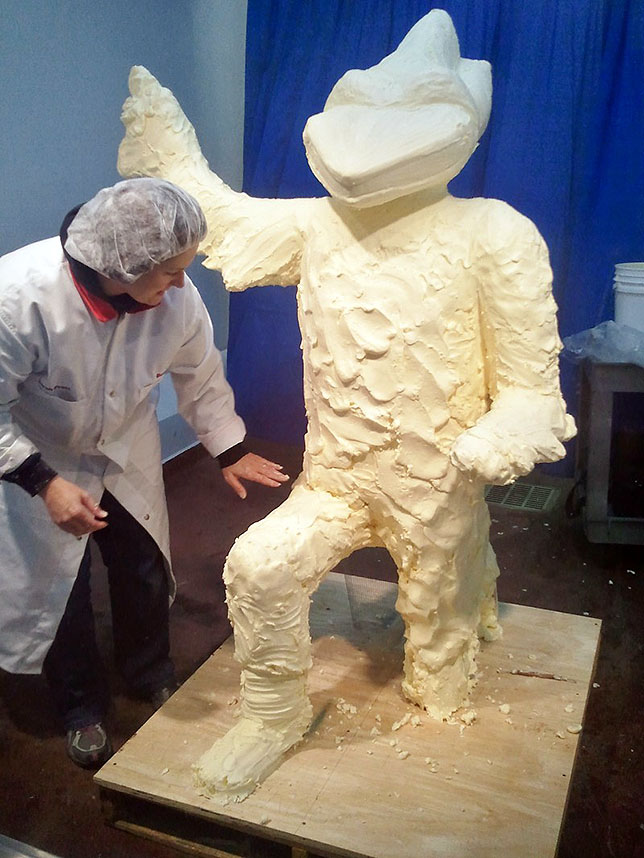 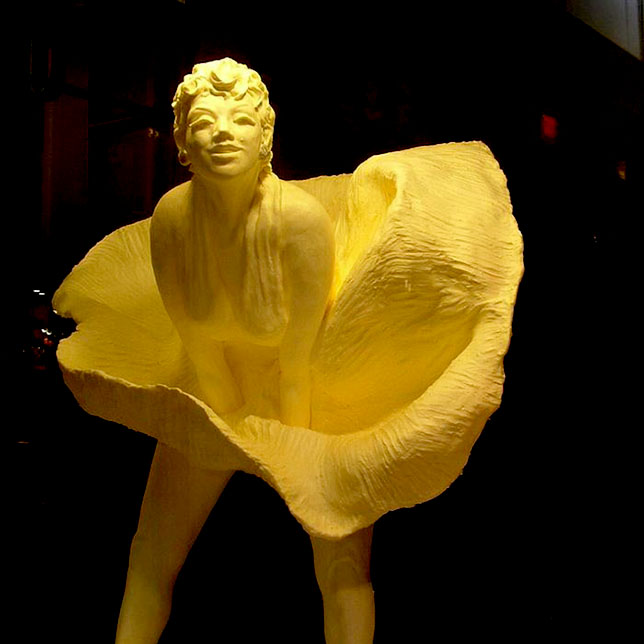 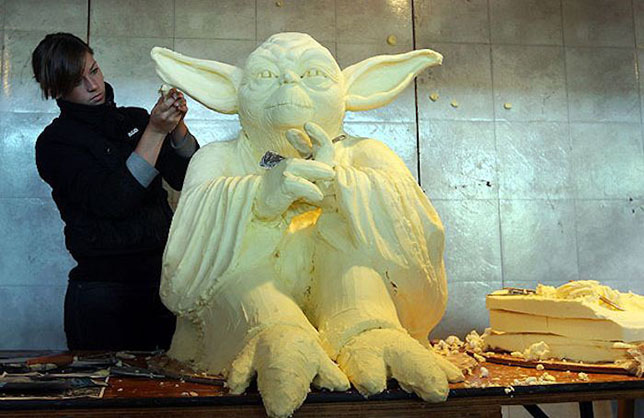 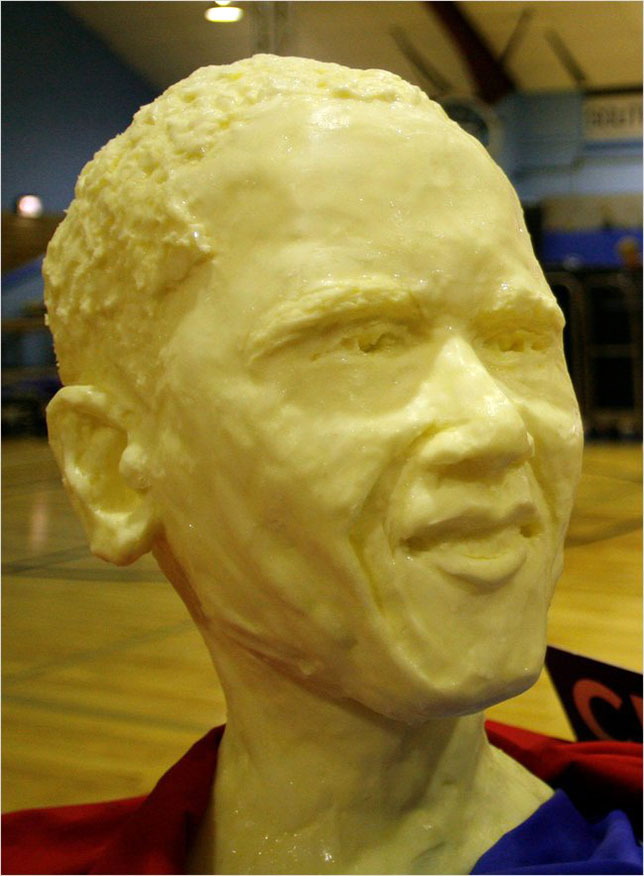 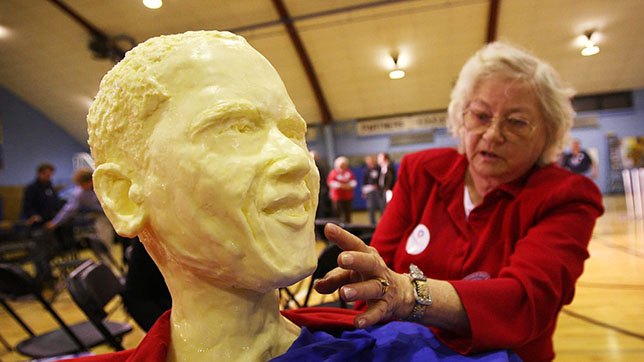 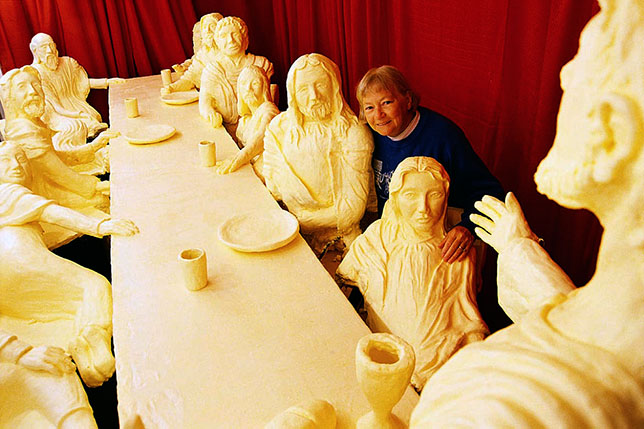 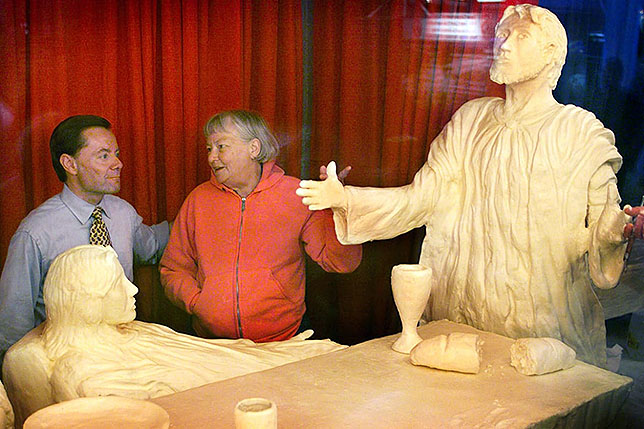 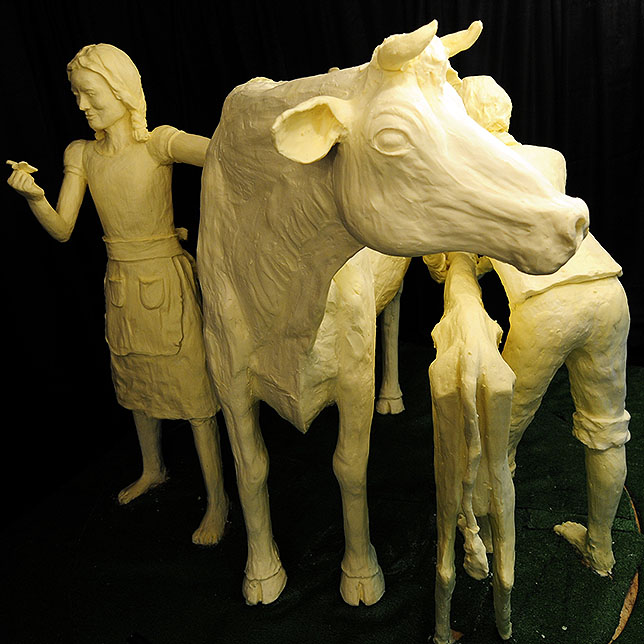 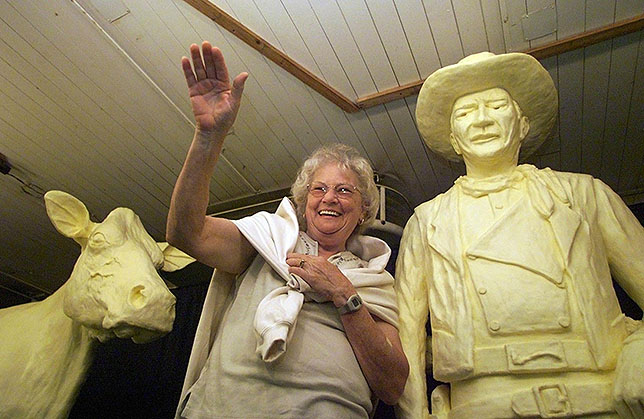 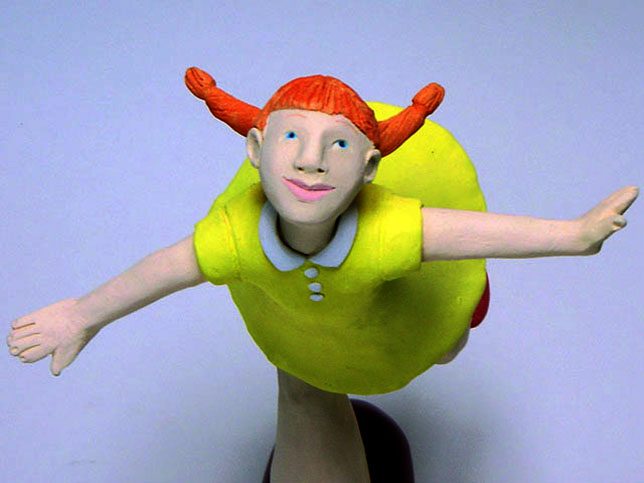 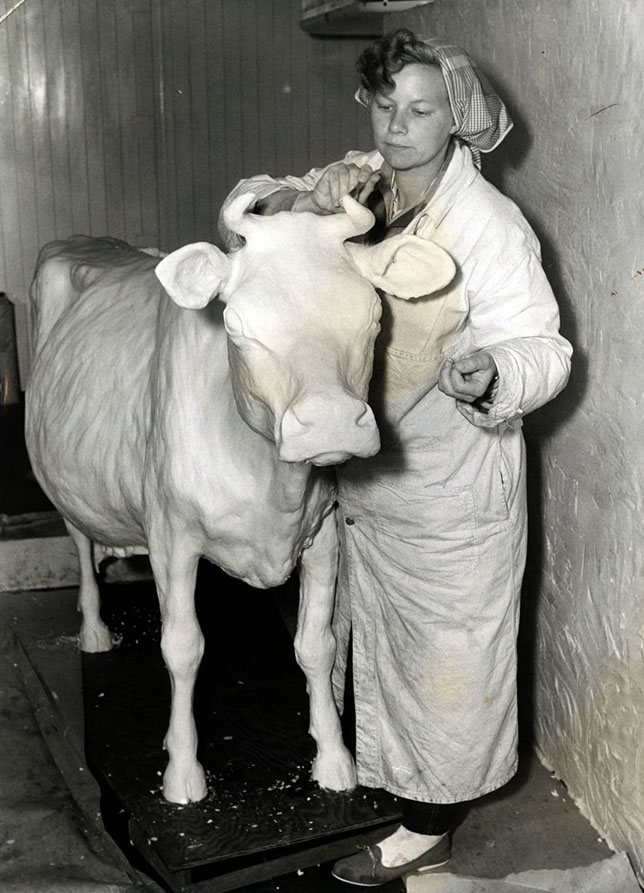 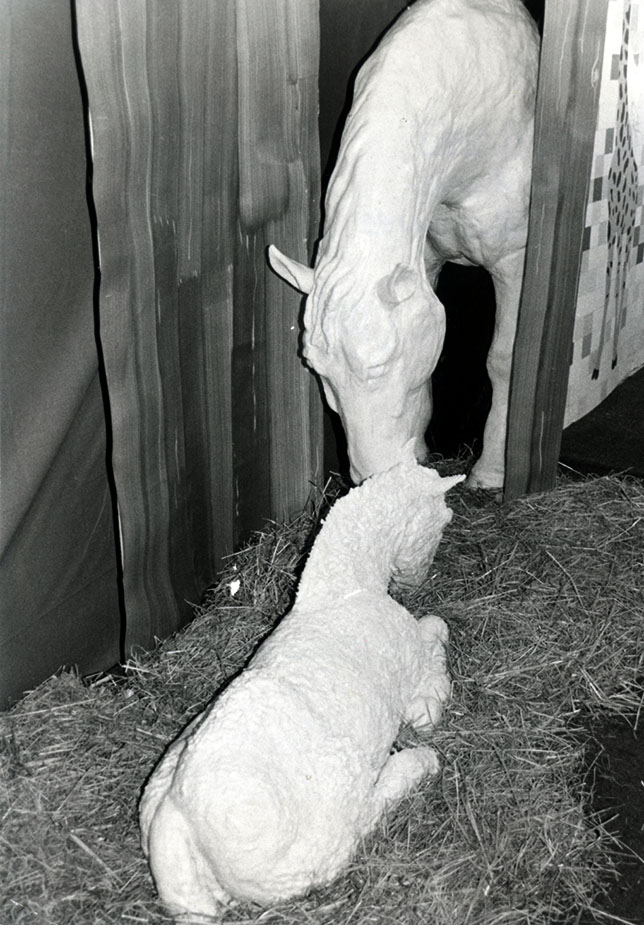 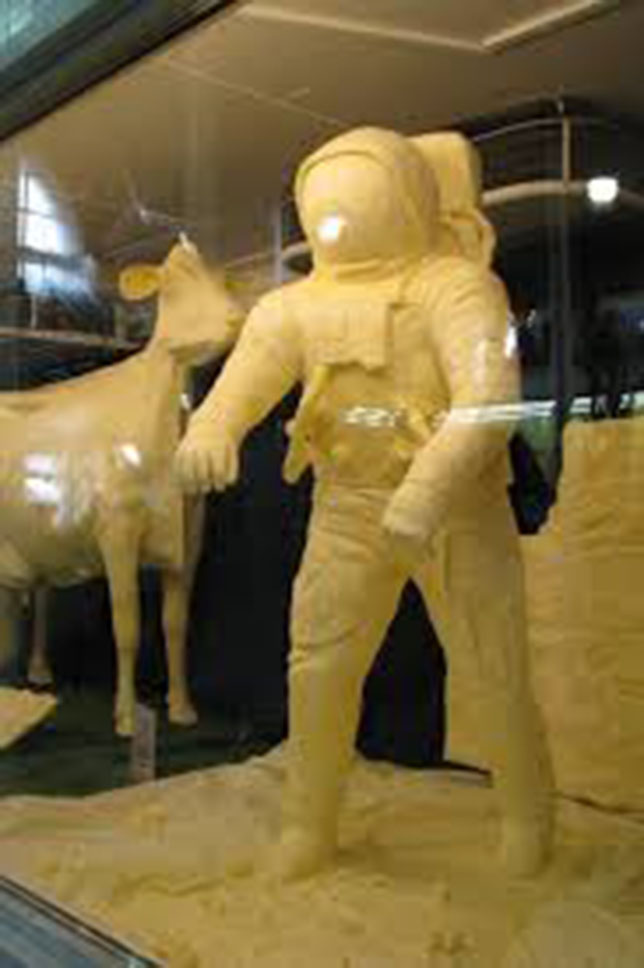 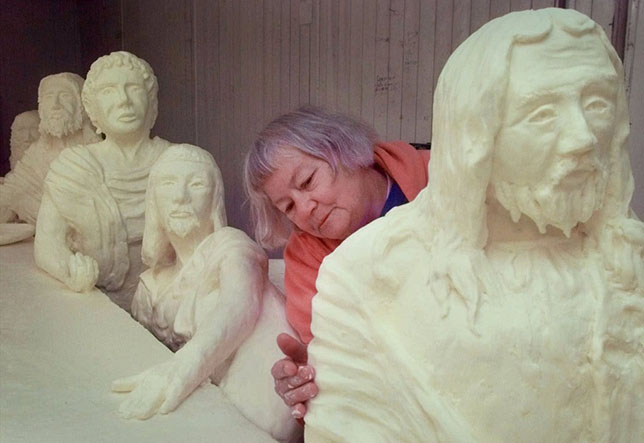 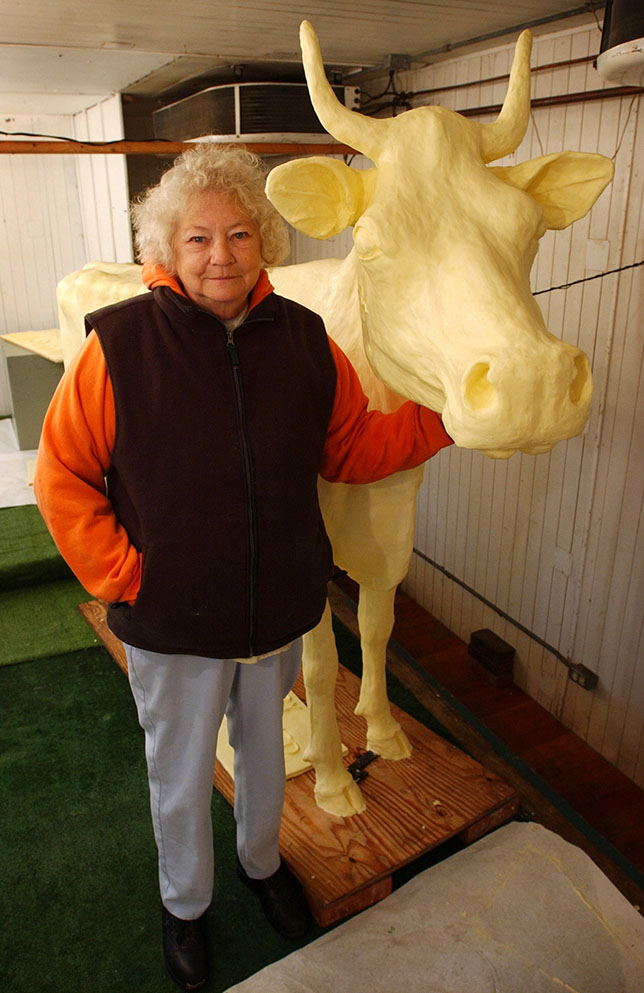 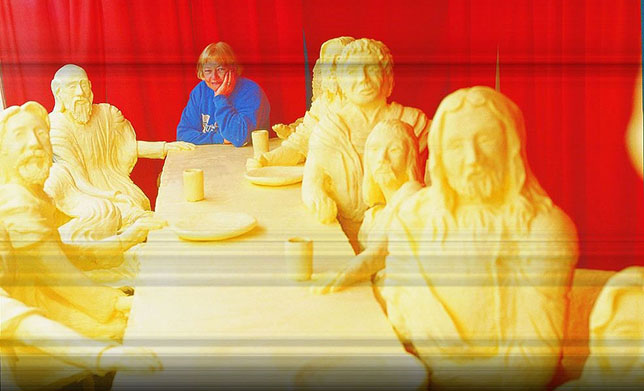 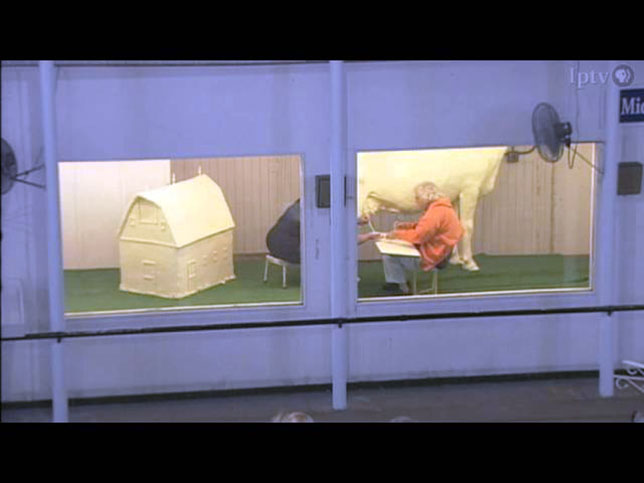 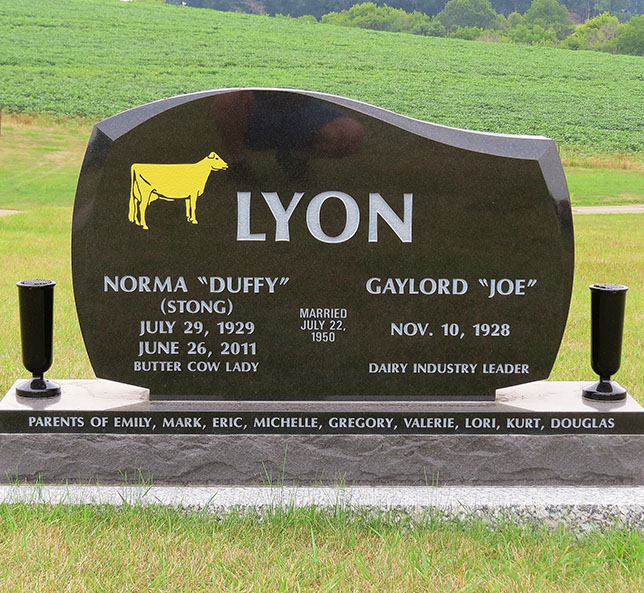 Giuseppe Franco Angeli (1935 – 1988) was an Italian artist born in Rome. At the age of nine, following his father's death, Angeli began working as a storeroom boy. He also worked in a car body repair shop and was an upholsterer for a time. All these aspects of his early life affected his art career and style. Later in life, his style included the use of fabrics, templates, and scraps of cloth reminiscent of his past upholstery work.

From 1955 to 1957, Angeli was a self-taught artist. Though Angeli had never taken formal art classes, he began painting in 1957 during military service. While stationed in Rome, Angeli met a sculptor named Edgardo Mannucci. Mannucci had connections with a painter called Alberto Burri and Angeli found the painter's work fascinating. He adapted Burri’s techniques in his own work.

In March 1959, in a joint exhibition at the Galleria La Salita with Tano Festa and Giuseppe Uncini, Angeli exhibited his works for the first time. In January 1960, the Galleria La Salita gave him his first solo exhibit. His featured works consisted of veils of oil paints and nylon stockings stretched tight and covered with gauze.

In 1962, Angeli took part in "New Perspectives of Italian Painting", an exhibition at the Galleria Comunale d'Arte Moderna in Bologna. Angeli showed a series of works with symbols of power—initially swastikas, crosses, and half-moons. For instance.

Angeli's 1966 solo show Half Dollar exemplified his views on coins, which he saw as "the small symbolic world that he had been seeking for years. He had previously thought he had found this in bags, coats of arms and stone inscriptions." In October, the exhibition America America (Half Dollar) opened at the Galleria dell'Ariete with veiled, gilded eagles in hues of blue, white and red.

In 1968, Angeli's preoccupation with the Vietnam war and the student protests caused him to produce works such as Università Americana (American University; 1967) and Corteo (Protest March; 1968), which he created using the technique of social reportage. In the early 1970s, Angeli continued to focus on realistic political events. He produced a series of landscapes, a geometrically inspired work dedicated to the coup in Chile on 11 September 1973.

Angeli's deep interest in social and popular culture issues continued in his works throughout the 1980s, when he returned to the theme of war in a series of exotic landscapes with pyramids, obelisks, and airplanes that eventually became Esplosioni (Explosions; 1986). The stylized forms had spires, capitals, and deserted squares as if in "a grandiose, excruciating sense of excavation in which history and life resurface as perfect, intact geometric solids radiating fresh, fragrant pure colors—green, blue, and red." The theme of "puppets", which he developed in 1984, became a kind of self-portrait that foreshadowed the last stage of his life.

© 2019. All content on this blog is protected by international copyright laws All images are copyrighted © by Franco Angeli or assignee. Apart from fair dealing for the purpose of private study, research, criticism or review as permitted under the Copyright Act, the use of any image from this site is prohibited unless prior written permission is obtained. All images used for illustrative purposes only 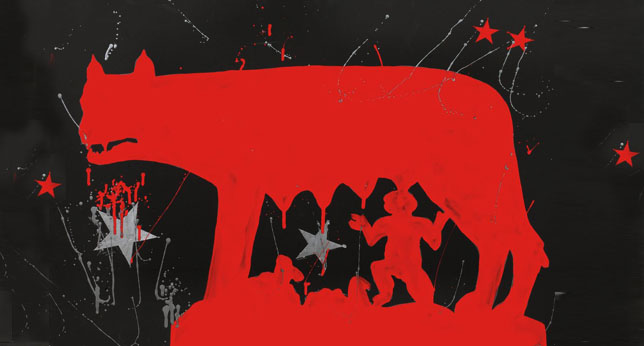