Luchita Hurtado (1920 – 2020) was a Venezuelan-born American painter based in Santa Monica, California, and Arroyo Seco, New Mexico. Born in Venezuela, she moved to the United States as a child. Although she became involved with art after concentrating on the subject in high school, she only received recognition towards the end of her life. She was noted for painting in abstract and for spanning different art movements and cultures.

Hurtado emigrated with her mother and sister to New York City when she was eight years old, while her father stayed in Venezuela. She studied fine art at Washington Irving High School and volunteered at La Prensa, a Spanish-language newspaper where she met her first husband, a Chilean journalist named Daniel de Solar. The couple married when Luchita was 18. It was through him that she was introduced to many Latin writers and painters. She divorced de Solar in 1942. She subsequently married Wolfgang Paalen, an artist and collector, after being introduced to him by Isamu Noguchi. However, their marriage fell apart shortly after her son from her first marriage, Pablo, died of polio. She wanted to have another child, while Paalen did not.

In 1945, she made the painting that is recognized as the first in her career, and began freelance work as an illustrator for Condé Nast and as a muralist for Lord & Taylor in New York. During this time, her circle of fellow artists expanded. One such connection she made was with Ailes Gilmour, who had roomed with Hurtado and de Solar when they were still married. Gilmour was the half-sister of Isamu Noguchi, so Noguchi and Hurtado became close, often visiting galleries together.

Prior to 1998 Hurtado's work was largely unknown outside of Los Angeles. At that time curators going through the estate of her third husband, the painter and art teacher Lee Mullican, uncovered a number of paintings signed "LH" that were not recognized as his work. From there, the paintings made their way to the hands of Paul Soto, founder of Park View, a two-year-old apartment gallery a few blocks from MacArthur Park in Los Angeles, and her first solo gallery exhibition since 1974 was held there.

Hurtado engaged with different styles that drew elements from 20th-century avantgarde and modernist art movements such as Surrealism, abstraction, and Magical Realism. Among her most well-known works is the ‘I Am’ series of the 1960s: self-portraits that Hurtado painted by looking down at her own body, often in closets as it was the only place she could work in between child-rearing and managing the home. Later works show her environmental concerns; recurring motifs include humans merging with trees and texts including ‘Water Air Earth’ and ‘We Are Just a Species’.

Hurtado's work was included in the Hammer Museum's Made in L.A. exhibition in 2018. Several visitors asked the curators if her birth date was incorrect because the work seemed contemporary. She remained active in the arts until her death, with the Los Angeles County Museum of Art exhibiting a key career survey of hers in February 2020. In 2019, she was named to the Time 100 list of influential people.

Despite receiving belated recognition for her work, Hurtado did not harbor feelings of resentment for that fact. In a 2019 interview with fellow artist Andrea Bowers for the magazine Ursula, she surmised, "Maybe the people who were looking at what I was doing had no eye for the future and, therefore, no eye for the present".

In 2019, Hurtado was listed in TIME 100: Most Influential People. Writing about her work, curator Hans Ulrich Obrist said that Hurtado’s ‘masterly oeuvre offers an extraordinary perspective that focuses attention on the edges of our bodies and the language that we use to bridge the gap between ourselves and others. By coupling intimate gestures of the body with expansive views of the sky and the earth, Luchita maps a visceral connective tissue between us all.

© 2020. All content on this blog is protected by international copyright laws All images are copyrighted © by Luchita Hurtado or assignee. Apart from fair dealing for the purpose of private study, research, criticism or review as permitted under the Copyright Act, the use of any image from this site is prohibited unless prior written permission is obtained. All images used for illustrative purposes only 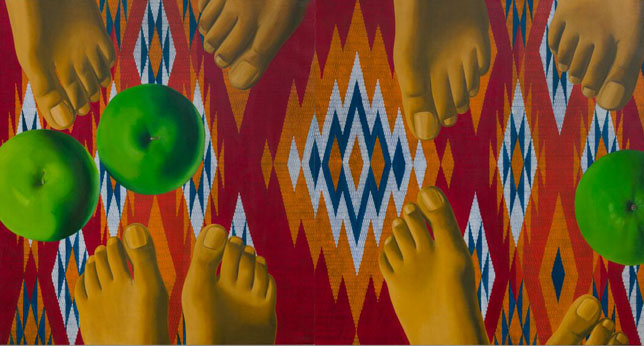 Over the last two decades Stuart Semple (1980) has built up a diverse and challenging body of work across multiple disciplines. Thanks to the support of brave collectors, galleries and museums he has enjoyed numerous solo and group exhibitions worldwide.

Stuart has a deep belief that art is neither an object nor an activity, but rather an experience that exists in the space between an artist’s intention and the participant.

This duty towards ‘experience making’ affords him the opportunity to play across a variety of devices; from internet performance, code, painting, drawing, printmaking, sculpture, popup stores, public art, happenings, broadcasting, culture jamming, even chemical formulas, paint itself or a good joke. However, it is Painting that has remained a true love and the backbone of Semple’s practice for the last 20 years.

His enduring love for music, poetry and the image-world give him a unique palette in which to weave emotional and critical narratives. These are approachable and understandable, whilst remaining challenging and nuanced beyond their surface. His art is an art for everyone.

Although diverse in it’s presentation, Semple’s body of work orbits around a handful of recurring themes; anxiety, society, cultural history, technology, connection, community and freedom. Ultimately landing with a clear-minded sense of utility, that art itself should have a social function. This is no more evident than in what he refers to as his ’social works’, these being charity funds, awareness raising campaigns, artist support groups and shared studios.

After studying fine art at the Yorkshire Sculpture Park, Semple’s works have been exhibited at numerous solo and group exhibitions, fairs and biennials and at institutions including The Barbican, ICA London, Goss Michael Foundation, Frieze, Art Basel Miami, Denver Art Museum and The Whitworth.

He has created large-scale public projects for cities including Melbourne, Dublin, London, Moscow and Manchester. His most ambitious was Happy City (2018) In which he created several large scale public interventions throughout Denver which was documented in the Amazon Prime documentary ‘Mr. Happy’.

Semple has presented for BBC TV and his 2019 ‘Hostile Design’ program for BBC Radio 4 was nominated for a radio academy award. He has written for The Guardian, Huffington Post, Vogue and held a weekly column for Art of England Magazine. His work has been featured in publications including Wired, Financial Times, GQ, Flash Art, ArtForum, Modern Painters, The Art Newspaper, New York Times, Architectural Digest and others.

Semple regularly speaks on art and mental health and has appeared at Denver Art Museum, Oxford University, Royal College of Art, The Southbank Center, The Whitworth, Frieze London and others.

On the first International Day of Happiness Stuart Semple was honoured by the UN with a Happiness Hero medal in recognition for his “HappyCloud” performance from Tate Modern in London.

Semple is an ambassador for mental health charity Mind, with whom he initiated the creative therapies fund throughout England and Wales.

© 2020. All content on this blog is protected by international copyright laws All images are copyrighted © by Stuart Semple. Apart from fair dealing for the purpose of private study, research, criticism or review as permitted under the Copyright Act, the use of any image from this site is prohibited unless prior written permission is obtained. All images used for illustrative purposes only 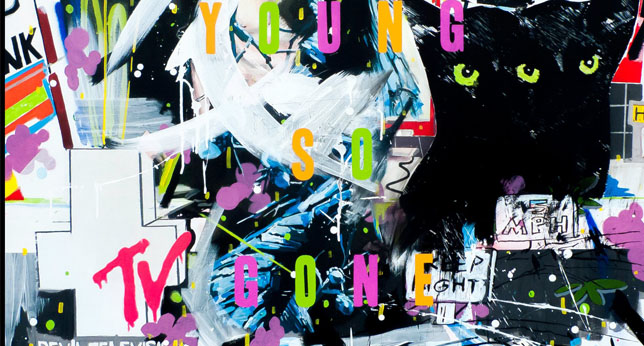