Laurie Lipton (1953) was born in New York and began drawing at the age of four. She was the first person to graduate from Carnegie-Mellon University in Pennsylvania with a Fine Arts Degree in Drawing (with honors). She has lived in Holland, Belgium, Germany, France, the UK and has recently moved to Los Angeles after 36 years abroad. Her work has been exhibited extensively throughout Europe and the USA.

Lipton was inspired by the religious paintings of the Flemish School. She tried to teach herself how to paint in the style of the 16th century Dutch Masters and failed. When traveling around Europe as a student, she began developing her very own peculiar drawing technique building up tone with thousands of fine cross-hatching lines like an egg tempera painting. “It’s an insane way to draw”, she says, “but the resulting detail and luminosity is worth the amount of effort. My drawings take longer to create than a painting of equal size and detail.”

If she can imagine it, she can realize it with immense clarity and finesse. When this expertise is married with her indubitably thought provoking ingenuity for weaving visual narratives filled with dramatic intrigue, you have a formula which enables the creation of some seriously compelling and intense imagery. Laurie is determined to address any subject which holds personal meaning for her, no matter how challenging or uncomfortable it may be for viewers. She constantly pushes herself and her audience with each new work, constructing powerful renderings which lead us to question our relationships, not only with ourselves and each other, but also with the traditions maintained and the new developments implemented in our modern era.

© 2019. All images are copyrighted © by Laurie Lipton. Apart from fair dealing for the purpose of private study, research, criticism or review as permitted under the Copyright Act, the use of any image from this site is prohibited unless prior written permission is obtained. All images used for illustrative purposes only. 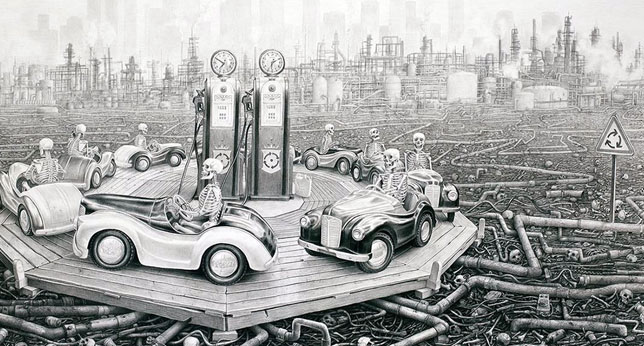