Mathieu Lehanneur (1974) is a French designer at the forefront of the international design scene. He has a multi-disciplinary approach to creativity – his projects transcend the boundaries of any one creative industry, encompassing product design, architecture, craftsmanship and technology. He is unafraid to embrace scientific methods to realise his designs, and often states that science is his biggest source of inspiration.

Lehanneur pushes the limits of design through his exploration of new technologies. For his 50 Seas exhibition, shown at Christie’s in Paris, Lehanneur created 50 ceramic disks, each one replicating the surface of the sea and painted in colours taken from images of seas around the world. Using 3-D modelling technology adapted from CGI, Lehanneur perfectly captured the liquidity of the ocean’s surface. Each ripple and trough is perfectly rendered, the light glistening over each disk as if it were reflected on the ocean itself.

His fascination with the liquid state of materials continues through his 2018 exhibition Ocean Memories. Using marble and bronze, Lehanneur created tables and benches that play with the balance between the geometric and the organic, each piece exploring the fluid transition between these two states of matter.

Lehanneur is considered one of the ‘100 World top designers and influencers’ by Wallpaper* and Surface magazines and has undertaken a number of high-profile collaborations with brands such as Nike, Kenzo, Sony and Cartier. His works can be found in the permanent collections of the Museum of Modern Art in New York, the San Francisco Museum of Modern Art, the Centre Georges Pompidou in Paris, Les Arts Decoratifs in Paris, and at the Design Museum Ghent. Lehanneur has also designed interiors for Saint-Hilaire Church in Melle, for Château Borély in Marseille, and for ArtScience in Boston.

© 2019. All images are copyrighted © by Mathieu Lehanneur or assignee. Apart from fair dealing for the purpose of private study, research, criticism or review as permitted under the Copyright Act, the use of any image from this site is prohibited unless prior written permission is obtained. All images used for illustrative purposes only. 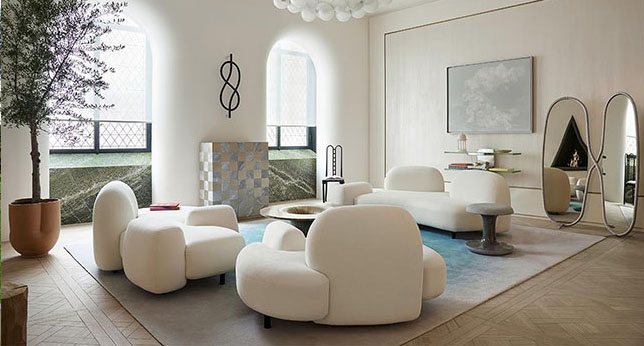 Lester Thomas Beall (1903 – 1969) was an American graphic designer notable as a leading proponent of modernist graphic design in the United States. He was a man with a very technology-oriented background

Lester Beall graduated with a Ph.D. in the History of Fine Art and the years following his graduation found him expressing an interest in modern art movements such as Surrealism, Constructivism, and Dadaism. His work as an advertiser and graphic designer quickly gained international recognition and the most productive years of his career, during the 1930s and 40s, saw many successes in both fields.

According to his online AIGA biography: "Through the 1930s and 1940s, Beall produced innovative and highly regarded work for clients including the Chicago Tribune, Sterling Engraving, The Art Directors Club of New York, Hiram Walker, Abbott Laboratories and Time magazine. Of particular interest was his work for the Crowell Publishing Company which produced Colliers magazine. The promotional covers "Will There Be War?" and "Hitler's Nightmare" are powerful designs which distill messages of the time. In these works, he utilizes angled elements, iconic arrows, silhouetted photographs, and dynamic shapes, all of which captures the essence of his personal style of the late 1930s. Also of interest in this period are the remarkable poster series for the United States government's Rural Electrification Administration."

His clear and concise use of typography was highly praised both in the United States and abroad. Throughout his career, he used bold primary colors and illustrative arrows and lines in a graphic style that became easily recognizable as his own. He eventually moved to rural New York and set up an office, and home, at a premise that he and his family called "Dumbarton Farm". He remained at the farm until his death in 1969.

Apparent from his drawings Beall's personal style was amongst the first in his time period to use a unique technique of using each stroke to outline his subject matter giving it dept and shape with each sweep of his hand. These are the very original magnificent examples of early abstract expressionism that later became staples of the famous De Kooning and other styles.

© 2019. All images are copyrighted © by Lester Beall or assignee. Apart from fair dealing for the purpose of private study, research, criticism or review as permitted under the Copyright Act, the use of any image from this site is prohibited unless prior written permission is obtained. All images used for illustrative purposes only. 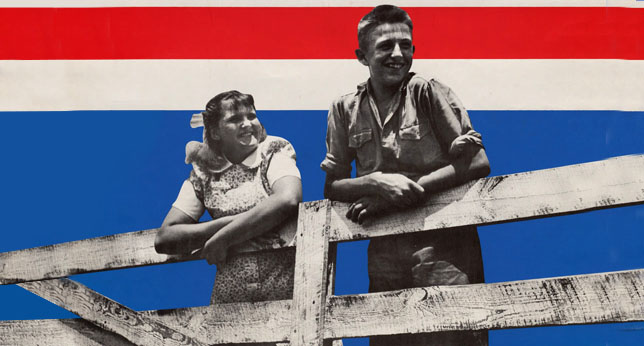