Daniel Hudson Burnham FAIA (1846-1912) was an American architect and city planner whose maxim, "think big," dominated his successful career. The firm of Burnham & Root was important in developing the skyscraper.

Daniel H. Burnham was born in Henderson, N.Y. In 1868 he worked for the architect William Le Baron Jenney in Chicago and then for Carter, Drake & Wight, where he met John Welborn Root. In 1873 the firm of Burnham & Root was established, and Burnham's career until 1891, the year of Root's death, was inseparable from that of his talented, innovative partner.

The firm, which employed as many as 60 draftsmen, moved into the just-completed Montauk Block (1882-1883) in Chicago, which they had designed. Although load-bearing masonry walls were outdated by 1889, Burnham & Root designed the 16-story Monadnock Building in Chicago (completed in 1891) of brick construction. The walls enclosed a portal-braced iron frame consisting of girders riveted to the columns for wind bracing and structural stability; this was the first example of portal bracing. Burnham & Root's further development of this structural innovation was the completely steel structure of the Rand McNally Building (1889-1890) in Chicago. Their four-story Reliance Building (1890; increased to 13 stories in 1895), also in Chicago, with terracotta facing material, gave expression to the steel-and-glass skyscrapers of the 1890s.

Burnham and Root were to have been the coordinators of the World's Columbian Exposition to be held in 1893 in Chicago, but on the day of the first planning conference Root contracted pneumonia, and died. Charles Follen McKim of the noted architectural firm of McKim, Mead & White filled the void left by Root and influenced Burnham in his "think big" attitude. Numerous architectural firms from Chicago, New York, Boston, and Kansas City designed specific buildings, and Frederick Law Olmsted was the landscape architect. The classical style provided the unifying element in the architecture of the exposition.

In 1891 Burnham established the firm of D. H. Burnham, which was replaced in 1896 by D. H. Burnham & Co. In 1894 he became president of the American Institute of Architects.

After the Chicago exposition of 1893 Burnham devoted his efforts to the "City Beautiful" movement of civic planning. "Make no little plans," he said, "for they have no magic to stir men's blood … Make big plans, aim high…. " His city planning aimed at creating beauty in a geometry of streets, with large parks and recreational areas and boulevards leading from a civic center to other nodal points of the city. In 1903 Burnham replanned Manila in the Philippines in this manner, ridding the city of its chaos and yet retaining its picturesque image. Baguio, 160 miles away, was planned as a summer retreat in the hills, with a dominant geometry adapted to the contours. Three days before the great earthquake of April 15, 1906, Burnham submitted his plan for San Francisco. Never implemented, it attempted to circumnavigate the hills and tie the whole street pattern together by an outer ring road. Chicago was replanned, and Burnham's ideas for a coordinated system of surface and subsurface freight distribution, linked to the waterfront activities, were partially realized. Washington, D.C., was "beatified" and railroads were removed from the Mall; Burnham built Union Station there.

Burnham's firm designed over 100 major projects: civic centers, office blocks, department stores, libraries, and numerous stations for the Penn Central Railroad. The station in Pittsburgh has been described as "Burnham baroque," and one critic sees the beginnings of Art Nouveau in its flowing lines.

© 2020. All content on this blog is protected by international copyright laws All images are copyrighted © by Daniel Hudson Burnham or assignee. Apart from fair dealing for the purpose of private study, research, criticism or review as permitted under the Copyright Act, the use of any image from this site is prohibited unless prior written permission is obtained. All images used for illustrative purposes only 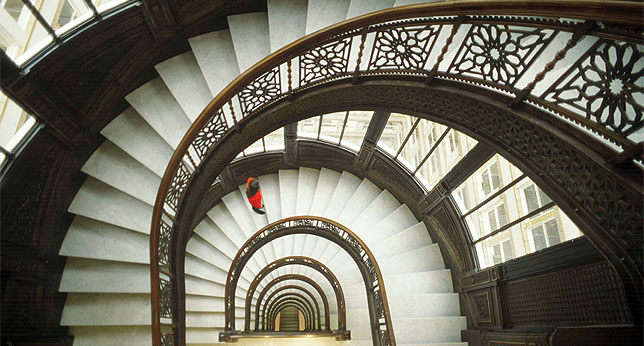 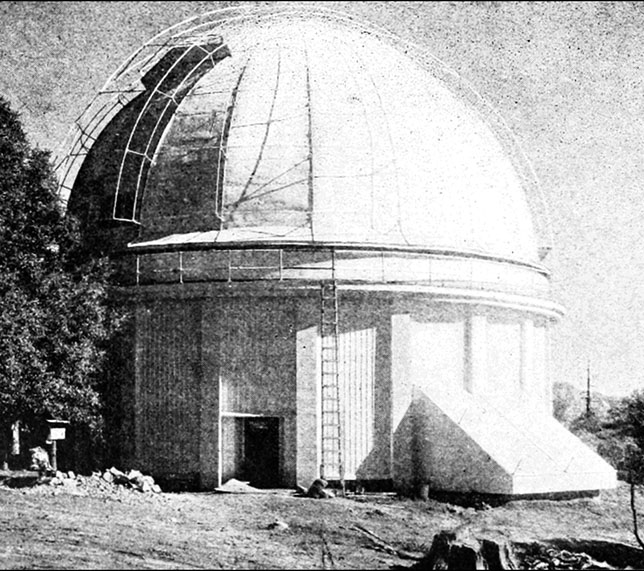 Simon Perry is a British sculptor and academic, based in Melbourne, Australia. Best known for his large-scale public art works for urban spaces in Australia and overseas, Perry's practice incorporates numerous sculptural techniques including casting, carving and fabrication. His works have been created in bronze, concrete, granite, steel, aluminium, wood and stone. Perry's commissioned pieces are predominantly site-specific, and often address elements of environment and public space with a gentle humour.

From the age of seven Perry was regularly taken to the British Museum where he developed an interest in Assyrian and Egyptian sculpture; he cites the smoothness, monumental scale and coolness of the stone as having a profound effect on him.

Between 1981 and 1984 Perry studied at the Chelsea College of Art (now Chelsea College of Art and Design) where he receive his Bachelor of Arts with Honours. From 1984 to 1987 he studied to receive his Master of Arts from the Royal Academy, where, in 1987, he won the Royal Academy Gold Medal for Sculpture. In 1987 he also won the prestigious British Prix de Rome for sculpture, a scholarship allowing him to study at the British School in Rome from 1987 to 1989.

Perry has received many public commissions both in Australia and abroad, and has stated: "I have been working in the public arena for a long time because it has interested me and allowed me to work on a scale and with budgets that would not have been possible in the gallery context."

Public Purse
Public Purse  is, for Australians at least, one of Perry's more recognisable works: located in the Bourke Street Mall, it functions as a unique, distinctive form of seating. The piece was commissioned by the council as part of their Percent For Art program in which one per cent of the council's budget was dedicated to funding public artworks with the goal of integrating art into the public spaces of the city.

He also comments on the competition for attention public art faces with regards to advertising: "Art in the public domain, and I am particularly referring to the city, is always competing with a whole range of things for our attention." Thus, the name Public Purse, is a reference to its commission from the Percent For Art Program, and is also a comment on the retail and department stores that populate the site.

Perry's Threaded Field
Threaded Field is a large-scale integrated sculptural installation located on the Northwest stadium concourse at Tesla Dome, Melbourne. Appearing in a series of thread-like segments, loops, knots and needles, the sculpture works to stitch together the various parts of the stadium exterior and concourse. Inspired by the architecture of the stadium, the sculpture is made of painted and polished steel.

Public Address
A scaled-up megaphone made of fibreglass, steel and sound equipment, Public Address functions in much the same way as a hand-held megaphone, except that rather than emitting the sounds of protest rallies it projects the sound of snoring.

Perry has observed that "[t]here are advantages and disadvantages to having a voice...if you have a voice you have a responsibility and a risk." In this way, Public Address, while dealing with notions of a public voice, also comments on the contested nature of public spaces. When Perry, an artist famous for his large-scale public art, elects to deal with anxieties about individuals expressing themselves as part of a collective in a public space he deliberately implicates himself in that confused nexus of being unable to express something terribly important.

© 2020. All content on this blog is protected by international copyright laws All images are copyrighted © by Simon Perry. Apart from fair dealing for the purpose of private study, research, criticism or review as permitted under the Copyright Act, the use of any image from this site is prohibited unless prior written permission is obtained. All images used for illustrative purposes only 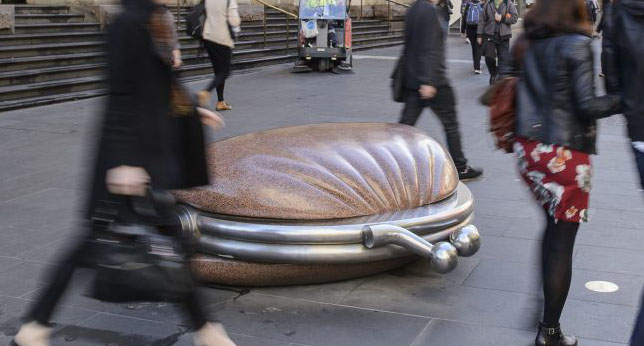