Murray Favro (1940) is a Canadian sculptor who lives in London, Ontario. His work that includes drawing, sculpture, performance, and installation, often incorporating slide and film projections, lighting effects, computer, and electronic technology. He is associated with London Regionalism.

Favro's work deals with the nature of perception, reality, and art itself, as well as with the insistent presence of the machine environment. He is an important figure among a significant generation of artists – Jack Chambers, Greg Curnoe and Ron Martin among them – who became active in that city in the early 1960s and drew national attention as the London Regionalism|London Regionalist School of artists. He is also well known as a founding member of the Nihilist Spasm Band.

From 1958 to 1962, he studied at H.B. Beal Technical and Commercial School, after which he enrolled in the specialized art classes offered at Beal (at the time, one of the few training schools for artists in Canada). Early on, he showed an interest in machines of all kinds, an interest that was encouraged by an uncle who was a tinkerer and inventor.

Favro began his career painting brightly colored works on masonite. A Canada Council Arts Bursary in 1970 allowed him to devote himself to quit painting to pursue his other interests – guitars, machines, airplanes, and experiments with film images and inventions. That year he developed his first successful "projected reconstruction," in which images on a slide are projected onto their wooden, white, life-sized counterparts, giving them color, detail, and identity.

The formative years of Favro’s practice in the 1960s were marked by a growing desire to collapse the boundaries between art and life. In contrast to Andy Warhol’s Factory led the American Pop Art movement of the period, Favro resisted the mass-produced image and object. He was determined instead to build, even replicate, his own ‘things’ from the materials at hand, repurposing the readymade and reasserting the relationship between object and maker.

Favro's work has been acquired for numerous public galleries and countless private collections across Canada, and has twice been the focus of comprehensive exhibitions, organized by the Art Gallery of Ontario (1983) and collaboratively by the former London Regional Art and Historical Museums and the McIntosh Gallery (1998). In 1997, he received the Gershon Iskowitz Award for career achievement. He is a 2007 recipient of the Governor General's Award in Visual and Media Arts. He is a member of the Royal Canadian Academy of Arts.

© 2019. All content on this blog is protected by international copyright laws All images are copyrighted © by Murray Favro. Apart from fair dealing for the purpose of private study, research, criticism or review as permitted under the Copyright Act, the use of any image from this site is prohibited unless prior written permission is obtained. All images used for illustrative purposes only Artist of the day, December 30: Salvador Dalí, a Spanish Surrealist painter and printmaker (#877)

As an art student in Madrid and Barcelona, Dalí assimilated a vast number of artistic styles and displayed unusual technical facility as a painter. It was not until the late 1920s, however, that two events brought about the development of his mature artistic style: his discovery of Sigmund Freud’s writings on the erotic significance of subconscious imagery and his affiliation with the Paris Surrealists, a group of artists and writers who sought to establish the “greater reality” of the human subconscious over reason. To bring up images from his subconscious mind, Dalí began to induce hallucinatory states in himself by a process he described as “paranoiac critical.”

Once Dalí hit on that method, his painting style matured with extraordinary rapidity, and from 1929 to 1937 he produced the paintings which made him the world’s best-known Surrealist artist. He depicted a dream world in which commonplace objects are juxtaposed, deformed, or otherwise metamorphosed in a bizarre and irrational fashion. Dalí portrayed those objects in meticulous, almost painfully realistic detail and usually placed them within bleak sunlit landscapes that were reminiscent of his Catalonian homeland. Perhaps the most famous of those enigmatic images is The Persistence of Memory (1931), in which limp melting watches rest in an eerily calm landscape. With the Spanish director Luis Buñuel, Dalí made two Surrealistic films—Un Chien Andalou (1929; An Andalusian Dog) and L’Âge d'Or (1930; The Golden Age)—that are similarly filled with grotesque but highly suggestive images.

In the late 1930s, Dalí switched to painting in a more-academic style under the influence of the Renaissance painter Raphael. His ambivalent political views during the rise of fascism alienated his Surrealist colleagues, and he was eventually expelled from the group. Thereafter, he spent much of his time designing theatre sets, interiors of fashionable shops, and jewelry as well as exhibiting his genius for flamboyant self-promotional stunts in the United States, where he lived from 1940 to 1955. In the period from 1950 to 1970, Dalí painted many works with religious themes, though he continued to explore erotic subjects, to represent childhood memories, and to use themes centering on his wife, Gala. Notwithstanding their technical accomplishments, those later paintings are not as highly regarded as the artist’s earlier works. The most interesting and revealing of Dalí’s books is The Secret Life of Salvador Dalí (1942).

© 2019. All content on this blog is protected by international copyright laws All images are copyrighted © by Salvador Dalí or assignee. Apart from fair dealing for the purpose of private study, research, criticism or review as permitted under the Copyright Act, the use of any image from this site is prohibited unless prior written permission is obtained. All images used for illustrative purposes only 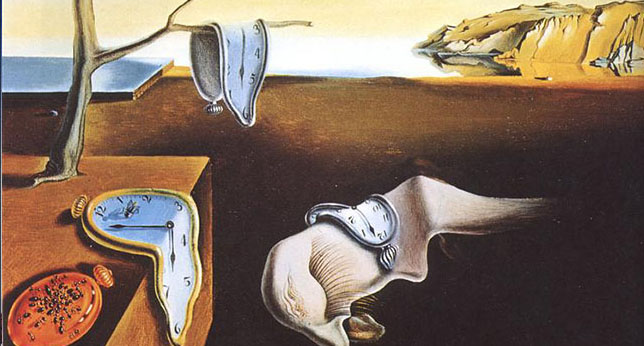