In 1972 there were two Marlboro men. One was the now-iconic white cowboy, alone, staring off into space with a steely gaze. The other was a Black man, pictured in his neighborhood, surrounded by people. He had an afro and wore burnt-orange turtleneck sweaters as he purchased vegetables from his local market or visited his tailor, sometimes with a smoking cigarette in hand. This warm, infinitely more relatable image—an alternative conception of masculinity, free of self-consciousness and grounded in community—was the creation of Emmett R. McBain Jr.

Emmett McBain (1935-2012) was born in Chicago, and his formative years were marked by determination. At age 12 he began taking summer classes at the Art Institute of Chicago. He started his formal art education at the Ray Vogue School of Commercial Art before switching to American Academy of Art in 1954 to study commercial art, while simultaneously taking night classes at the IIT Institute of Design.

Chicago of the 1950s and ’60s saw the golden age of Black consumer consciousness—a place and time where Black creatives in advertising began to speak to their own communities. McBain was both witness to and key protagonist of that movement, starting his career in 1956 at Vince Cullers Advertising, the first African American-owned advertising agency in the United States. McBain would go on to cofound what would eventually become the largest such agency in the country. When he passed away in 2012, his friend and fellow artist Lowell Thompson declared, “In a land of Mad men, Emmett McBain was one of the maddest and happiest and hippest.”

After graduating, McBain worked with Vince Cullers for a year before joining Playboy Records as assistant art director at age 22—“hired immediately after displaying samples of his work,” noted Record and Sound Retailing magazine. Within a year he was Playboy’s promotion art director, and his cover for the Playboy Jazz All Stars album was named Billboard’s Album Cover of the Week. Ever entrepreneurial, he used this recognition to start his own design studio, McBain Associates, which developed a relationship with the Mercury Record Corporation. By age 24 he had already designed some 75 album covers, mostly for the EmArcy jazz label, for artists including Tony Martin, Max Roach, and Sarah Vaughan.

McBain had a hand in launching another iconic product: the Ford Mustang. In 1964 he was art supervisor at J. Walter Thompson in Detroit and put together the dealer promotion campaign that accompanied the car when it debuted at the World’s Fair.

But advertising would soon witness the confident entry of African Americans, as both creators and image subjects. As the struggles over civil rights came to the fore and the Black Power movement gained currency, advertisers began to actively recruit African Americans in the hope that they would help clients speak more meaningfully to a sect of consumers who now spent almost $30 billion annually. McBain helped train this new generation of advertisers, teaching intermittently at Columbia College Chicago from 1968 to 1982.

In 1968 he returned to Vince Cullers Advertising to design the agency’s first million-dollar campaign, for the Lorillard Tobacco Company. The advertisements were for Newport’s menthol cigarettes, which had so far been seen as a niche product to be smoked when sick. In McBain’s ads the cigarettes were in the hands of young black men dressed in blue dashikis, their afros a graphic statement against the minty blue background. Over the next year Lorillard spent 87 percent more money specifically targeting African Americans; by 2011, surveys showed that the vast majority of black smokers preferred menthol cigarettes.

Three years later McBain joined forces with copywriter Tom Burrell to found their own advertising agency. “Emmett was key in getting the agency started,” Burrell explained to Target Market News. “He was a visual thinker, always had fresh ideas to the approach of marketing, my senior in the business, and I looked to him for leadership.” The Marlboro campaign was Burrell McBain’s first breakthrough, which helped them secure accounts with McDonald’s and Coca-Cola, and laid the foundations for their immense success as the country’s largest Black-owned agency. McBain left in 1974 and became immersed in the art community of Chicago’s Hyde Park neighborhood.

McBain’s two cigarette campaigns show just how quickly African American advertising executives developed their own voice. The 1968 Newport campaign was a statement of difference, relying on recognizably African cultural artifacts. This modulated into quiet confidence by the 1972 Marlboro campaign—the Newport man had to declare he was cool, the Marlboro man just was. This evolution from focusing on the community’s relationship with white society to communicating its internal ethos and culture is also reflected in two advertisements McBain designed to promote the agencies he worked for. The text-only promotion for Vince Cullers stacks up a list of expressions that contain the word black—“blackball, black book, black boy, black eye, black friday…”—before ending with “white lies. Black is Beautiful.” A few years later, his promotion for Burrell McBain asks, “What Color is Black?” A poem below replies: “Black is the color of the feeling we share, the love we must express. The color of our strength is Black.” (The author of the poem, Barbara D. Mahone, became McBain’s third wife.)

The Black Arts Movement paralleled the rise of the African American advertising agencies—the two feeding each other. In 1974 McBain opened his own art gallery, The Black Eye, with an exhibition titled “Creative Juices” featuring the work of “mesmerizers” like the artist Calvin Jones. For the next ten years McBain focused on his art while occasionally designing for nonprofits and publishers. Even after he returned to advertising—as a senior art director, first at N.W. Ayer & Son, and then at Eisaman, Johns & Laws—art remained an essential part of his life. In 1991 he convinced Beefeater gin to fund a series of countrywide arts programs, community projects, and scholarships that promoted African American art.

By the time he succumbed to cancer in May 2012, McBain had been recognized by AIGA, the Society of Typographic Arts, and the Art Directors Clubs of Chicago and Detroit, and his papers were archived at the National Museum of American History. A few days before he died, Burrell remembers telling him, “The way you have been living... Think of it as 135 years in Emmett years!”
(Transcipt from the AIGA, Biography by Avinash Rajagopal)

© 2020. All content on this blog is protected by international copyright laws All images are copyrighted © by Emmett McBain or assignee. Apart from fair dealing for the purpose of private study, research, criticism or review as permitted under the Copyright Act, the use of any image from this site is prohibited unless prior written permission is obtained. All images used for illustrative purposes only 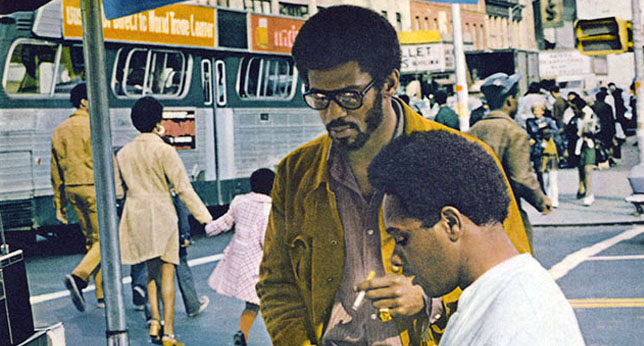