Artist of the day, October 9: Simeon Nelson, an Australian sculptor and transdisciplinary artist (#807)

Simeon Nelson (1964) is an Australian sculptor and transdisciplinary artist born in England and came to Australia in 1967. Since 2001 he has lived and worked in London. He is Reader in Sculpture at The University of Hertfordshire, Hatfield, UK and a fellow of the Royal Society of the Arts.

Simeon Nelson was educated at Sydney Grammar School and obtained a Bachelor of Fine Art degree at the Sydney College of the Arts in 1987. Nelson has exhibited extensively since 1986, his most recent solo exhibitions being Mappa Mundi, University of Hertfordshire Galleries, Hatfield, UK and Terroir/Boudoir, Elastic Residence, London, UK (2005). He is currently inaugural artist-in-residence at the Royal Geographical Society, London. His first major London solo exhibition was at the RGS exhibition space on Exhibition Road, London.

His work has been selected for major national and international exhibitions, including the National Gallery of Australia Sculpture Prize, Canberra 2005.

Nelson has deployed a range of materials, techniques and ideas in his oeuvre. Much of his work looks at the forms, systems and structures of nature, as described and represented by science. The branching of a tree, the root directory of a website or the infinitely intricate tracery of the lungs or vascular system of the human body form a set of important metaphors in his work. They are seen as structurally and conceptually analogous.

These works ask questions such as: how organic (natural) form is appropriated by art, science and design; how their visual codes and models of how the world works become fixed in public consciousness. This concern with the connection between the natural and the artificial manifested in a series of ecological installations in the 1990s including Landscope (The Machine in the Garden) . Representations of nature and nature itself were combined in large scale works that suggest that nature creates art as much as art creates nature.

© 2019. All content on this blog is protected by international copyright laws All images are copyrighted © by Simeon Nelson. Apart from fair dealing for the purpose of private study, research, criticism or review as permitted under the Copyright Act, the use of any image from this site is prohibited unless prior written permission is obtained. All images used for illustrative purposes only 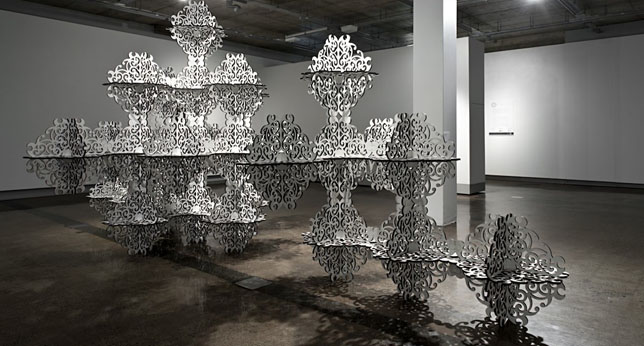