Alice Aycock (1946) is an American sculptor and installation artist. She was an early artist in the land art movement in the 1970s, and has created many large-scale metal sculptures around the world. Aycock's drawings and sculptures of architectural and mechanical fantasies combine logic and imagination, and intermingle science and faith.

Aycock's early work focused on associations with the environment. Often built into or onto the land, her environmental sculptures and installation art addressed issues of privacy and interior space, physical enclosure, and the body's relationship to vernacular architecture and the built environment.

One of her best known works of this variety is Maze (1972). Installed on Gibney Farm near New Kingston, Pennsylvania, Maze is thirty-two feet in diameter and constructed of five six-foot high concentric wooden rings with three openings through which the viewer could enter. Once inside, the participant is meant to experience disorientation as s/he traverses through its labyrinth to reach its center, and to feel similar discomfort again when exiting. Aycock was inspired by the axial alignment of a compass as well as author Jorge Luis Borges's essay, "Pascal's Sphere," which presents the idea that the center of the universe is located wherever the perceiver is standing.

Starting in 1977, use of recurrent themes of danger and unease were augmented by Aycock's growing interest in metaphysical issues. Her sculptures now excluded viewer participation and looked more like theatrical stage sets; and explored combinations of science, technology, and spirituality.

After 1982, her work revolved around "blade machines" – sculptures made out of revolving, motorized metal blades. With its obsessive erudition, Aycock provokes a fear of an existing and ultimately incomprehensible higher order that man makes endless attempts to understand.

Aycock's recent work takes the form of large-scale sculptures based on natural forms, cybernetics, physics, and other postmodern issues, increasingly implementing hi-tech materials to create complex sculptures in public space. In 2005, Ramapo College featured her installation called Starsifter, Galaxy, NGC 4314, a 30-foot-long sculpture named for the NGC 4314 galaxy which is located 40 million light-years from Earth. Her 2014 piece Park Avenue Paper Chase was installed along Park Avenue in New York at a cost of over $1 million, and included seven large-scale sculptures – some of which were the largest ever installed in the public art program at that location.

© 2018. All images are copyrighted © by Alice Aycock. The use of any image from this site is prohibited unless prior written permission is obtained. 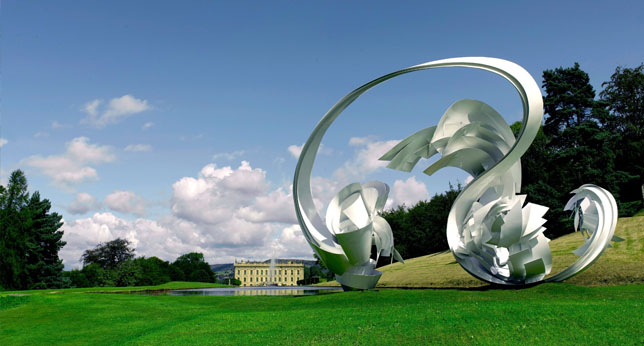