Judith Shea (1948) is an American sculptor and artist. She received a degree in Fashion Design at Parsons School of Design in 1969 and a BFA in 1975. This dual education formed the basis for her figure based works. Her career has three distinct phases: The use of cloth and clothing forms from 1974 to 1981; Hollow cast metal clothng-figure forms from 1982 until 1991; and carved full figure statues made of wood, cloth, clay, foam and hair beginning in 1990 to present.

Her first New York City presentation was at Alanna Heiss's CLOCKTOWER galleries Project Room in April 1976. In a performance based on color theory, she made a full spectrum of sheer silk shirts and pants. Dancer Juliette Shen, changing clothes at Shea's direction, added and subtracted layers, mixing new colors live in the transparent silk.

With the support of NEA grants in 1984 and 1986, Shea began casting her figures into iron and bronze, allowing her to work more three dimensionally.

In 1989 Shea began to carve what she termed ironic monuments and statues in wood. Following this in 1994 The Public Art Fund sponsored Shea's installation, The Other Monument. This wooden equestrian monument was of a free black man astride a black horse. Two years previuos Shea had been awarded the Saint Gaudens Fellowship. Influenced by her research into his Civil War works, Shea realized that at that time there were no figurative monuments to the other victory of the American Civil War - Emancipation.

Following several fellowships abroad, Shea began a group of works in 2000 that deal with the figure imagined as character and icon. This work set the stage for the evolution of her next major body of work, which she titled Judith Shea: Legacy Collection. The topic of the Legacy Collection was the artist’s first hand experience of 9/11: She lives very near what became Ground Zero of the World Trade Center site. In this very personal response, Shea fashioned a group of mannequin-like figures, as if placed in the windows of the Brooks Brothers store just across from the site on that Tuesday. They are looking skyward, elegant in gray felt, covered in dust and debris. About them Shea has written, "I was struck by this unique juxtaposition, the sleek image of Success - American Style, opposite this spectacular attempt to topple it, with just the unbroken shop window between themz'.

In 2012, Shea curated an exhibition at the invitation of The National Academy Museum. From their Collection she chose portraits and self-portraits of female members of the Academy from 1858 to 1971.

© 2018. All images are copyrighted © by Judith Shea. The use of any image from this site is prohibited unless prior written permission is obtained. 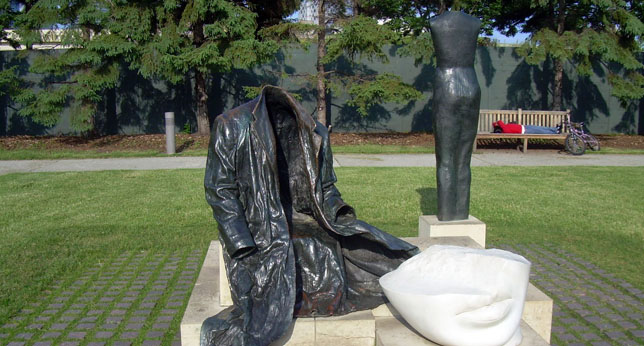